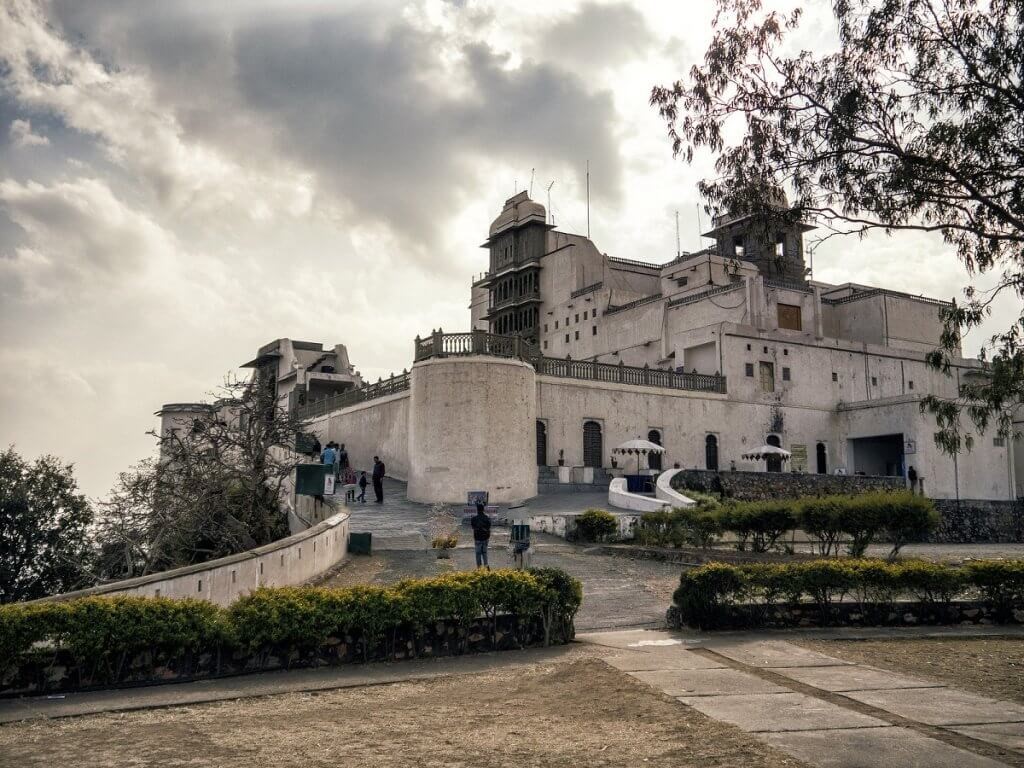 Monsoon Palace, also known as Sajjangarh fort, is a magnificent hilltop residence overlooking Fateh Sagar Lake in Udaipur, Rajasthan, India. Sajjangarh is named after Maharana Sajjan Singh (1874-1884) of the Mewar dynasty. It was built in 1884. The palace provides a panoramic view of the city’s lakes, palaces, and countryside. It is mainly built to observe monsoon clouds, so it is called the monsoon palace.

Availability of Guides at Sajjangarh udaipur

For paid tours, guides are sometimes available locally, or are included in the budget if you go with a tourism company.

The Maharana is said to have built it at the top of the hill to get a view of his ancestral home, Chittorgarh. It once belonged to the royal family of Mewar. It is now under the control of the Rajasthan Government’s Forest Department and has recently been opened to the public. The palace offers breathtaking sunset views.

Its architect, Maharana Sajjan Singh, had intended to build a five-storey astronomical observatory. With Maharana Sajjan Singh’s untimely death, the plan was discarded. It was later transformed into a monsoon palace and a hunting lodge. In the evening, the palace on the Aravali Hill near Udaipur is brightly illuminating with golden-orange light which catches everyone’s eye.

The Fort’s base is built on marble pillars with unique floral and leaf designs engraved all over them. Lime mortar is used to plaster the palace walls. A large central court with a beautiful staircase, as well as various quarters and rooms, can be found. The Fort has high turrets with guards stationed at each tower. The domes, fountains, and jharokhas that surround the palaces are stunning Rajasthani architectural masterpieces.

The construction of the Monsoon Palace/Sajjangarh Fort was overseen by Maharana Sajjan Singh. Maharana Sajjan Singh was a thinker, developer, and short-lived ruler of the Mewar dynasty. Even though he only ruled for ten years (from 1874 to 1884), he made a significant contribution to the preservation and establishment of Udaipur’s glory and culture. Dam and road construction, water supply, and infrastructure development were among his civil works.

During the reign of Maharana Sajjan Singh in the nineteenth century, Udaipur was crowned as India’s second municipality. Lord Ripon bestowed the title “Grand Commander of the Star of India” on the Maharana in November 1881, on the occasion of Queen Victoria’s coronation.

What is the best way to get to Sajjangarh Palace?

Udaipur, the City of Lakes, is well linked. It has an airport, a train station, and a national highway that connects it to all of the adjacent cities and states. Sajjangarh Palace can be reached in a variety of methods, as detailed below.

Local transportation, like as buses and rickshaws, can take you to the palace from the station, airport, or the main city, or you can hire taxi cabs. To get to the palace, you must first approach the hills and climb them. You have two options: walk or drive your automobile; the latter is preferred because walking is exhausting and not everyone is capable of it.

There are many things to do at Sajjangarh Palace

Sajjangarh Fort has some interesting facts.

Keep these things in mind when visiting Sajjangarh Palace.

Hotel or Restaurant near by Sajjangarh udaipur

Nearby Attraction of Sajjangarh Fort udaipur

Udaipur, and indeed the entire state of Rajasthan, is famed for its historical remains that now serve as first-class tourist attractions, many of which are forts, temples, and palaces. All of them exude luxury and transport visitors back to the days of yore. This one is no exception, boasting stunning views that photographers would kill for, as well as excellent dining and lodging close by. Check the weather forecast and get ready to travel!

1: Can a Traveler Tempo can go to the Sajjangarh Fort

Yes, it is possible. Last week, I was there and observed a traveller tempo with visitors… if they could get there, so can you.

2: How much time it takes to visit Sajjan Garh, If i want to see sunset?

3: Is vehicle allowed till the hill top?

Vehicles are permitted up to the gate, and free parking is available.