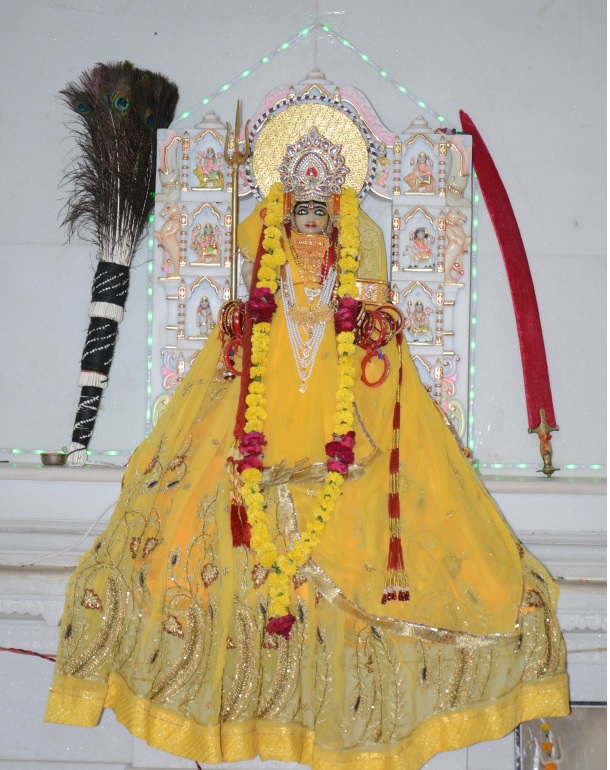 Karni Mata Temple (also known as Shri Manshapurna Karni Mata Temple) is a Hindu temple in Udaipur, Rajasthan, atop of Doodh Talai Lake which offers breathtaking views of the city. It is located on the Machla Magra Hills near the Din Dayal Upadhyaya Park, which is at a perfect height of 150 meters and may be reached via 1050 stairs from Maniklal Verma Park leading straight up to the temple or a four-minute ropeway ride. Surprisingly, the temple has a huge, well-kept area that encompasses the majority of the hillock.

*Timings may vary on special occasions and festivals.

The panoramic view of the lake, palaces, whitewashed, tightly spaced dwellings, Gulab Bagh, and the entire area surrounding the hill is intoxicating. It is possible to view the shades of water of Lake Pichola from here. Karni Mata’s stone idol is enshrined here. From the temple, as well as while climbing, one may have a stunning perspective of the entire city and its lakes. The hike is pollution-free because no vehicles are permitted within the hill’s perimeter.

The Mansapurna Karni Mata Ropeway connects the Shri Karni Mata Temple at Machhala Hill Top and Udaipur’s Deendayal Upadhyay Park. It is one of the most popular tourist destinations in Udaipur.

In 2008, Kailash Khandelwal, a businessman, collaborated with UIT to build the Mansapurna Karni Mata Ropeway. The ropeway connects the two locations through a 387-meter fixed-grip mono cable, and it is Rajasthan’s first ropeway. The mounted cable car is also known as a Gondola, which refers to the compartment suspended from an airship and utilized for personnel transportation. The gondolas can carry six people on one trip and six more on the return trip, as the line is bidirectional. You might even be lucky enough to catch a view of a spectacular sunset from the cable cars if you visit in the evening, around 6 to 7:30 PM.

The cable cars transport visitors up the hill in 4-5 minutes from Deendayal Park in Doodh Talai to Karni Mata temple. To get to Karni Mata’s Temple, you have to walk through the steps after arriving at the cable car stop. Pichola Lake, Fateh Sagar Lake, the majestic City Palace Complex, Sajjangarh Fort, and the panoramas of the Aravali mountains on the other side of the lake can all be seen from the cable car. There’s also a viewpoint where you may catch a glimpse of the city’s sunset known as the sunset point. In addition, the lighting on the various palaces creates a spectacular view at night.

* The Prices are approximate so they may vary

Karni Mata’s main temple is in Deshnok, widely known as “the Temple of Rats,” which is 30 kilometers from Bikaner. Karni Mata was a Hindu saint who was born in the Suwap village of Jodhpur district in 1387 AD as the seventh daughter of the Charan Rajput dynasty. Goddess Durga was said to be her embodiment.

Ridhu Bai was her first name. She married Depoji Charan of Sathika village after only two years of marriage, and despite her husband’s initial mocking, she married off her sister Gulab to her husband and left the village forever to satisfy her wish to quit all worldly affairs and live a nomadic existence. After roaming for a while with her followers and herd, she arrived at Deshnok and settled down, becoming Karni Mata in the process.

The temple is notable for its massive population of 25,000 rats, who are referred to as “Kabbas” by the locals. The rat population is said to have risen after Laxman, Karni Mata’s stepson fell and perished in the Kapil Sarovar in Kolayat Tehsil while attempting to sip water. Following Karni Mata’s repeated pleadings, Yama, the God of Death, decided to reincarnate her son as a Rat and also allowed all of her male children to be reincarnated as Rats.

Kabbas are believed to be exceedingly pious, and it is considered “prestigious” to give them sweets and eat the food they munch. Udaipur’s temple also boasts a large number of white and black Kabbas. Karni Mata laid the foundation stone for two of Rajasthan’s most important forts, the Fort of Jodhpur and the Fort of Bikaner. On March 21, 1538, while returning from Deshnok, the Convoy came to a rest near Kolayat Tehsil to drink water. When her companions returned to her, she was nowhere to be found, and after extensive searching, she was never located, so she simply vanished at the age of 151.

Maharana Karan Singh built the Karni Mata Temple in Udaipur between 1620 and 1628 while working on the expansion of Machla Magra’s residential districts. The temple was not well-known until 1997, and just a few people came to see it. Devotees began crowding the temple premises in droves only after the Mansapurna Karni Mata Development Committee completed a rehabilitation project in 1997. The temple is now completely equipped with conveniently accessible staircases and ropeways, as well as numerous resting areas for the convenience of Karni Mata’s followers and worshippers.

When the land of Machla Magra was established for residential reasons between 1620-1628, Maharana Karan Singh built the temple in Udaipur to symbolize the limit and safety of Udaipur. The temple had been abandoned for a long time before the temple committee restored and rebuilt the buildings in 1997, and the work is still ongoing. The temple grounds are fairly spacious and serene. The stairs approach to the temple is a 10-minute walk with overlooks, rest stops, and a water cooler. A high structure with holes in the walls may be found to the left of the stairwell, a little distance away.

The structure was once utilized as a hideaway for kings to hunt and hide their weapons through the openings. It is possible to visit it, but only at your own risk because it is unmaintained and may include snakes and other creatures. You might see peacocks if you take the stairwell, and their symphony is most loud in the morning. Apart from the temple itself, there are elongated premises leading up to the ropeway station, and one should be wary of the monkeys, who chased me twice. From the banks of Lake Pichola to the Hill of Machla Mangra, the 4-minute ropeway adventure in colorful red, yellow, and green cabins begins.

The “Shri Mansapurna Karni Mata Temple” is a must-see as it has the capability to grant wishes and provides more than just tranquillity and peace; it is Udaipur at its finest.

The Karni Mata Temple is located in the heart of Udaipur’s city center. Udaipur Airport is around 24 kilometers distant, and Udaipur City Railway Station and Udaipur City Bus Depot are only 4 kilometers away. It is conveniently positioned in the city’s center, To get to Doodh Talai, visitors can use native Tongas, auto-rickshaws, or taxis. Karni Mata Temple is accessible by ropeway.

Visitors to the temple simply need to get to Doodh Talai Lake, where ropeways will take them to the temple. The ropeway station is about a 5-minute walk away from the Temple. Visitors who prefer to reach the temple on foot can also take the help of the staircase accessible from the Manikya Lal Verma Park near the lake. It’s not simple to get to this temple. The mound of Karni Matha temple, on the other hand, would entice you with its splendor. To get here, take a ropeway and then climb up a short distance. Some people would go all the way up. For the same, there are stairwells. Whatever route you take, the view from the top of the hill is worth it.