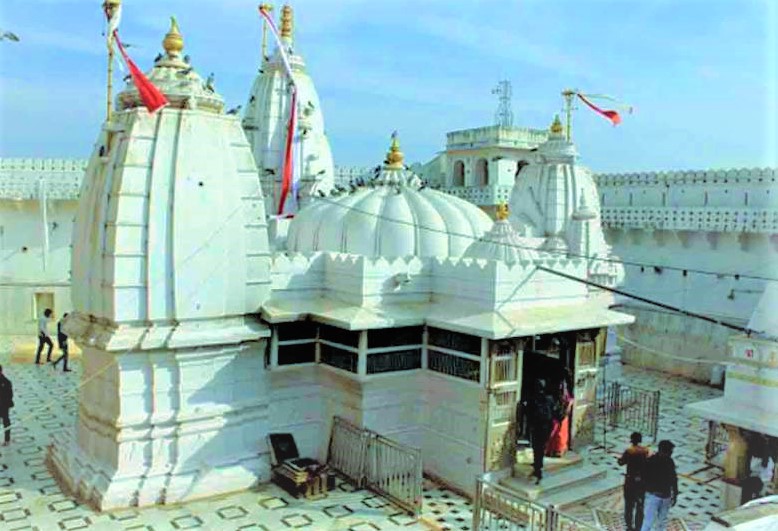 In Rajasthan, India, there is a well-known temple devoted to Lord Vishnu called Charbhuja. It is located in the Garbhor village of the Kumbhalgarh tehsil of the Rajsamand district. This temple has a lengthy history of myths and legends associated with it. It is considered an epic center of Vaishnava worship and is one of the most prominent sites for Lord Vishnu devotees. The Pandavas are also thought to have revered the temple and its deity.

Udaipur is 112 kilometres away, while Kumbhalgarh is 32 kilometres away. Mewar is notable for its distance – it is thought to be a pilgrimage spot with a legendary miraculous statue of Charbhuja ji. Sanwaliyaji Temple, Keshariyanath Temple, Eklingnath Temple, Shrinathji Temple, Dwarkadhish Temple, and Charbhujanath Temple are among the most well-known Mewar temples.

Charbhuja Temple, Garhbor (Rajsamand) Charbhuja is a historical and old Hindu temple in the hamlet of Garhbor in the Kumbhalgarh tehsil of the Rajsamand district of Rajasthan, India. Kumbhalgarh is 32 kilometres away, and Udaipur is 112 kilometres away. Mewar is notable for its remoteness, and is thought to be a pilgrimage spot with a massive miraculous statue of Charbhuja ji. Mewar is known for its temples such as Eklinganath, Shrinathji, Dadhrikadh, and Charbhujanath.

The temple was constructed in 1444 AD. According to inscriptions inside the temple, the area was known as Badri at the time, hence the temple was known as the Badrinath or Lord Vishnu temple. According to mythology, the temple’s idol is actually magical. This idol stands 85 centimeters tall. The idol’s four arms carry a conch shell, a mace, a Lotus, and a discus. Mirrors, marble, and Lime Mortars are used to construct the temple. Garud ji is enshrined in the temple’s outer courtyard. Shri Gang dev erected the temple based on divine directions he received in his dreams.

Things to do in and Around

The temple is an excellent location for spiritual redemption. Vaishnava worshippers go to the site for religious reasons. If you are a Vaishnava devotee, then going to the temple is all you need to do. Your Rajasthan journey will never be complete without a visit to the Charbhuja temple.

This temple is open to visitors and devotees at all times of the year. This temple is open all year and there is no specific time when visitors should come. The events and occasions associated with Lord Vishnu, on the other hand, can be considered the seasons that attract the most people.