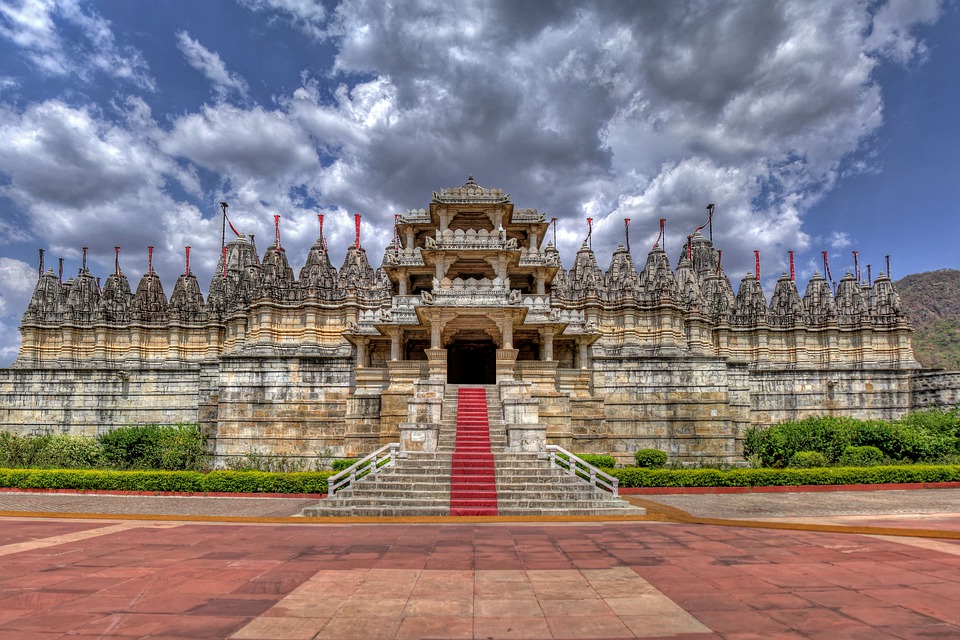 Ranakpur is a small yet lovely village in the Pali district of Rajasthan, located close to the Desuri Tehsil in Sadri town. On the western edge of the Aravalli Mountain Ranges, it is between the two famous cities, Udaipur and Jodhpur.

For nature enthusiasts, Ranakpur is the ideal place. The misty blue Aravalli mountains surround this attractive and peaceful community, which is located amidst lush flora. The profusion of nature in Ranakpur’s animal sanctuaries, as well as valleys, waterfalls, farms, and lakes, produces a spellbinding natural impression.

Ranakpur is well-known for its exquisite Tirthankara-themed Jain temples. The most well-known Jain Temple exemplifies Jain creativity and sculpture at its finest. The Parasnath Temple and the Adinatha Temple are some of the other noteworthy temples in the neighborhood. You may go wolf-spotting at the Jaba Wolf Point and watch a beautiful sunset at the Ranakpur Dam, in addition to spiritual growth.

You can participate in a variety of activities in Ranakpur to ensure that you have a great experience. In Roopnmata, you may go trekking or have an exciting Jeep Safari at the Ranakpur Wildlife Sanctuary. Near the many waterfalls in Ranakpur, some of the most sought-after activity spots may be found. Crocodile spotting is another fun pastime available here.

In Ranakpur, tropical weather is to be expected. Summers are often hot and dry, with the hottest months being May, June, and July. During the summer, temperatures might reach 38 to 39 degrees Celsius. Rainfall is in short supply, with annual precipitation of only 55 cm. Ranakpur is best visited during the winter months. The weather in the area is great for tours, treks, animal viewing, and picnics.

The timings of the temple are:

Tirthankara Adinatha is honored at the famed Jain temple in Ranakpur. According to mythology, Dharma Shah, a local Jain businessman, began building the temple in the 15th century after receiving a supernatural vision. According to Jain cosmology, Adinath is the first Tirthankar of the current half-cycle (avatar). The village of Ranakpur and the temple are called after Rana Kumbha, the province ruler king who financed the temple’s construction.

Ranakpur’s Chaturmukha Jain Temple of Rishabhadeva sits in somber grandeur in the heart of the lonely and lovely valley of the Aravalli’s, skirting the torrent Maghai and wrapped in the seclusion of the surrounding forest. The three-story marble edifice, which has been placed on a towering pedestal and to which the artist’s genius has imparted exquisite artistic charm and which his great devotion has endowed with serene spiritual dignity, is truly a poem in stone. This magnificent monument of spiritual architecture appears drenched in celestial ecstasy, majestic yet in total harmony with Mother Nature, on whose gorgeous lap it lies. The surrounding hills, dwarfed by their majestic stature, appear to be engrossed in hushed meditation as if enchanted. The harmony attained between Nature’s abundant generosity and man’s artistic expression of gratitude is symbolized uniquely in this Divine Creation. To witness this holy sanctuary in its breathtakingly exquisite surroundings is to have one’s soul instantly lifted.

Rajasthan is well-known for its plethora of art treasures. Its architectural monuments are regarded as some of the best in the world. As an outstanding piece of art and architecture, the Ranakpur Jain Temple surpasses them all. This shrine contains a number of exquisitely carved sculptures that defy comparison. The temple stands as a testament to India’s cultural history, distinctive architecture, and the vision and foresight of India’s past master craftsmen.

This temple is the culmination of four outstanding and dedicated searcher’s visions and efforts. They were Acharya Somasundatsuri Dharanashah, Kumbha Rana’s Minister, Rana Kumbha himself, and most importantly, Depa or Depaa, the architect who made the dream a reality.

In the fifteenth century of the Vikram Era, Acharya Somasundarsuriji was a charismatic figure. Shrishti Dharanashah was from Nadia, a hamlet near Ranaipu. He had moved to Malgadh from here. Kirpal was his father’s name, and Kamalde was his mother’s. Ratanashah, his older brother, was his only sibling. They were members of the famed portal family. Dharanashnh met Acharya Somasundarsumi, who instilled a profound spiritual desire in his heart. Dharanashah took the severe vow of lifelong celibacy at the age of thirty-two when he visited Shatrunjaya, the holiest of all Jain pilgrimages. He had risen to the position of Porwal. Rana Kumbha thanks to his acute intellect, keen administrative power, and instinctive ability to lead and govern. Dharanahah had a spontaneous desire to build a temple for Lord Risabihadeva, which he determined should be unparalleled in beauty. According to mythology, he had a dream one night. Dharanashah had a vision of Nalinigulma Viman, the celestial plane believed to be the most beautiful. Dharanashah selected this heavenly Viman, as the model for the temple.

Even after fifty years, the temple that began to build in Vikram Samvat 1446 was not completed. Because of his advanced age and deteriorating health, Dharanashah planned to install the Principal deity’s idol as soon as possible. The idols were ceremoniously installed by Acharya Somalsundarsunii in the year 1496 of the Vikram Era, once the temple was completed. After 50 years of hard effort and dedication, the Minister’s goal came true in the form of a majestic temple, a picture of the Viman of the gods. One can’t help but admire and respect this remarkable artist’s originality and expertise.

Fortunately, in the Vikram Samvat 1953 (1897 A.D.), Sadri’s entire congregation Shri Sangha handed over the shrine’s governance to Sheth Anandji Kalyanji Trust (Pedi). Soon after taking command, the Pedi’ focused on the principal responsibility of providing pilgrims with facilities and protection from wild animals. The government then embarked on a massive renovation project for the temple. The renovation, which began in the Vikram Year of 1990 and lasted eleven years, was completed in the Vikram Year of 2001.

The craftsmen who chiseled the stone have given this historic structure such a delicate grace that world-renowned architects and sculptors have lavishly lauded it as one of the world’s wonders. This restored temple has regained its legendary status in the worlds of art and religion. Thousands of art lovers and spiritual seekers from all over the world visit this picturesque location each year. They are well compensated. The Pedi has built numerous new Dharmashalas (inns) to accommodate the growing number of tourists. There used to be only one old inn for pilgrims. There are now three new inns, each with all of the modern conveniences and services.

The essence of this masterpiece, however, can be discerned in the fact that it was conceived as an image of the celestial Viman Nalinigulma, and that its materialization acquired an aura that transports the beholder to a dream-world where he experiences the rare and divine magnificence of the heavenly Viman. If the purpose of art is to sublimate the mind and experience the ecstasy of the finer and higher stages of consciousness, the Chaturmukha Temple has unquestionably achieved this goal.

–>Ranakpur is famous for its marble Jain temples and is considered the most magnificent of the Jain temples. There is also a small sun temple run by the Udaipur royal family.

–>Ranakpur temples, built in the 15th century, are the largest Jain temples. The temple is said to have been built with the help of Rana Kumbha, the ruler of Mewar, by Seth Dharna Sah (a Jain businessman).

3.Where is the Ranakpur temple situated?

–>The Ranakpur Jain Temple is one such temple that should be visited if you are in Rajasthan. It is a Jain temple dedicated to Tirthankara Rishabhanatha in Ranakpur, Rajasthan, near Sadri town in Pali district, between Udaipur and Jodhpur.

4.How many pillars are there in the Ranakpur Jain temple?

–>There are 1444 pillars. A wonderful Jain temple with 1444 pillars – Ranakpur Jain Temple.